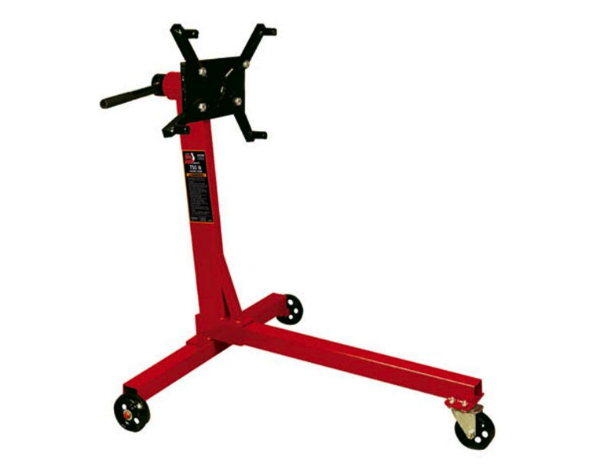 Torin Jacks is known for manufacturing different hydraulic hoists, chain hoists, engine stands and other tools that can be used for car repairs. Torin T23401 is the cheapest and lowest capacity engine stand that Torin Jacks provides. This engine stand can hold engines up to 0.375 ton (750 lb) weight. Engine stand is recommended to use with smaller engine blocks, such as 4 cylinder engines. An engine stand allows for fast and convenient storing of engine blocks to allow performing repairs for the engine block more easier.

Torin T23401 engine stand is made from a steel material. The construction of the stand is made from 3 steel tubes in a square shape. The quality of the material is very similar to other engine stands at this price range. Engine stand comes dismantled in a box and needs to be assembled. The assembly instructions are not the easiest to understand, but the construction of the stand is very simple so it should take a little time to assemble the stand. It can also be easily disassembled, so the stand takes up less space when stored.

As this engine stand only has a single leg with one caster at the end and does not support very heavy loads when compared to more expansive stands, the construction of the stand is not the most stable. When storing larger and heavier engines on the stand you will find that it wobbles quite a lot when you move the stand with an engine. However, the stand is going to work well with lighter and smaller engines up to 400-500 lb (180-225 kg) weight.

Engine stand is equipped with a rotating head, that allows to rotate the engine stored on the stand 360 degrees around. On the front of the head there is a mounting plate with four adjustable arms. These arms can be adjusted for different types of engines, so you can store majority of car engines on this stand. On top of the head there is a locking pin that allows to secure the engine in a position, when performing repairs to an engine block. The head of the stand can be locked in 90 degree angles. However, the head with an engine stored is still very loose when you put in the locking pin and may require some modifications for larger engine blocks. Holes in the head, where you should place the locking pins may no line up correctly when an engine is stored on the stand, so there might be some difficulties putting in the locking pin. If so, you would need to drill additional holes to allow to position the engine correctly on the stand.

Torin T23401 engine stand comes with just a single leg and 3 casters, two at the back of the stand and one at the front of the leg. Caster on the front can be turned 360 degrees around for better maneuverability. However this engine stand does not provide the best maneuverability, but it will be good enough for most uses. Remember to use the stand on a level and sturdy floor.

Because this engine stand has got a single leg design with just 3 casters, it is a lot less stable than engine stands with two legs or stands with 4 and more casters. It will be good enough with engines up to 400-500 lb (180-225 kg) weights, but using the stand with heavier engines with weight close to 750 lb won’t be smooth. Larger engine block will make the stand to wobble more when you try to move it, there is even a slight chance that a large engine block might fell over on this stand. Casters have a small size, which makes the rolling of a hoist with an engine more difficult. You should especially pay attention to the front caster when putting load on the stand, as it may get damaged on heavy loads. It is recommended to lube all moving parts of the stand before usage, such as casters and head turning mechanism.

Billy Miller
Father, husband and mechanic with over 20 years of experience, currently also a blogger. Passionate about all things related to cars industry.
Latest posts by Billy Miller (see all)
Tagged in 750 lb engine stand 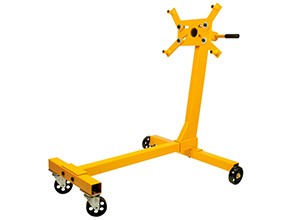 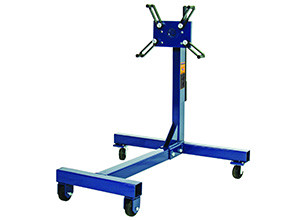 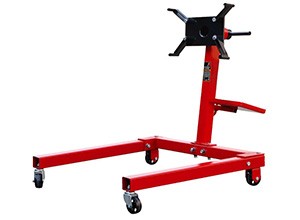