How does a hydraulic jack work? 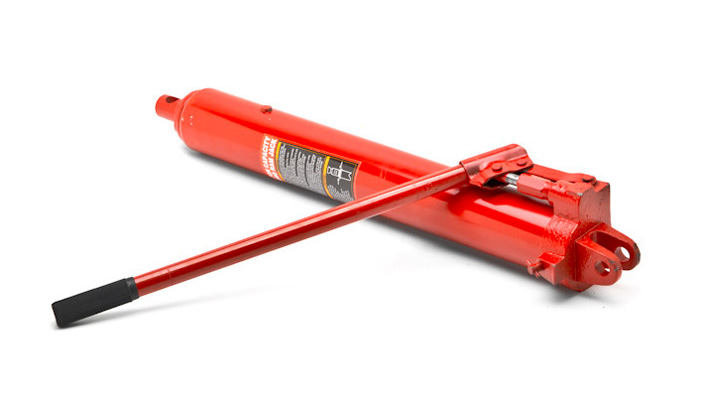 The physics behind a hydraulic jack

where the pressure is the same in both cylinders, but the surface area increases. As difference between surface areas of both cylinders increase, as greater the potential force output of the larger cylinder is going to be. The working principle of a hydraulic jack used in an engine hoist is basically the same, the unit consists of two cylinders, one smaller and one larger, and load is being lifted by applying a small force in the smaller cylinder that multiplies in the larger cylinder, allowing to slowly lift the ram.

Video showing the disassembly process of a hydraulic jack

Hydraulic jack used on an engine hoist has similar parts to other hydraulic jacks, the main difference is that these jacks are taller in height, so that the ram can lift the boom of a hoist in a greater height. The jack consists of a cylinder, where the hydraulic fluid is held, around the cylinder is an oil chamber. Oil is used as a hydraulic fluid, because it also lubricates other parts of the jack. Inside the cylinder is a ram which is moved up or down by increasing or decreasing the oil pressure inside the cylinder. On the bottom of the ram inside the cylinder is a piston, which is properly sealed, to not let the pressure to bypass on the other side. On top of the ram a boom of the hoist is attached, so pumping the jack will raise the boom. There are multiple smaller copper washers, o-rings and sealing gaskets inside the jack to properly seal the oil, so the jack does not start to leak oil while lifting heavy loads.

On the side of the jack is a pumping system that moves oil from one cylinder to other. The pumping system consists of a pump cylinder, a handle socket, a handle, which is inserted into the handle socket and hand powered to apply pressure inside the cylinder, and other small rings, pins, links and steel balls to cover the pump cylinder and washers.

All in all, hydraulic jacks are pretty simple devices when looking at their construction, but they are capable to lifting very large amounts of weight, applying relatively small amount of force to them.

How a hydraulic jack works

From a users perspective, when working with a hydraulic jack, you need to insert the metal pumping bar into the handle socket and pump it, which will push the ram up and raises the boom with a load attached to the end. To lower a load you need to open the bleed valve located on the base of the jack. But what happens inside of the cylinder when working a jack?

An informative animation, showing the working principle of a hydraulic jack

Well, basically the same Pascal’s principle is being used to lift a load. When you activate the pumping system by inserting the pumping bar into the handle socket and pumping it, the hydraulic fluid (oil) is pushed to the cylinder though a one-way valve, applying pressure to the fluid while filling the cylinder. The fluid can only flow back from the cylinder through another valve which is blocked by a steel ball, to open it you must unscrew the bleed valve located at the bottom of the ram.

Because the one-way valve does not allow the fluid to go back, the pressure in the cylinder builds, while the jack is being pumped. The pressure inside the cylinder puts out force and lifts the piston and the ram upwards, allowing to lift heavy loads by continuously applying small force in the small cylinder, which is multiplied in the larger cylinder. Basically, the larger the cylinder is, the more weight you could lift, which allows to lift very heavy loads simply using a hand pump mechanism.

Hydraulic cylinders are used in mechanical devices all around us, from car brakes to many hydraulic equipments that not only lifts, but also pushes, drills, cuts, crushes and does all kinds of other movements. The working principle of all these devices that use a hydraulic cylinder is very similar, what differs them is their specific usage and amount of force they output, which determines how strong the structure of the device must be to withstand the high pressures inside the cylinder. 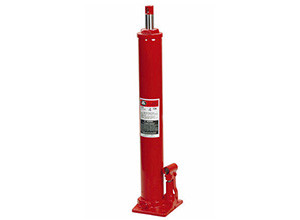 How to bleed a hydraulic jack? 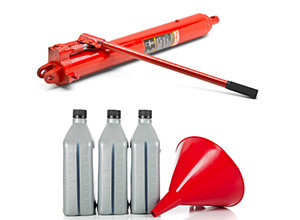 How to change oil of a hydraulic engine hoist?